(Be sure to flip thru the slideshow above!) 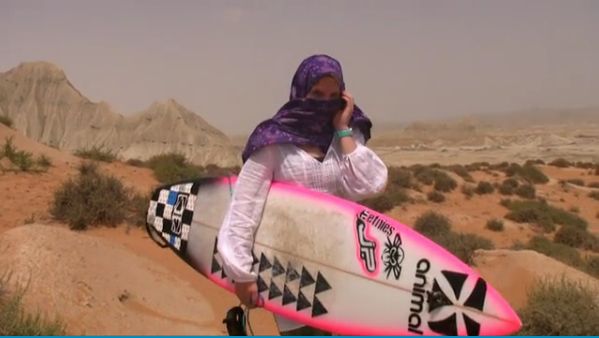 Motivated to explore how they could surf and film in Iran, a country geopolitically misperceived by the West, they wondered would it be possible for women to get to the water and go surf?

Almost immediately any worries they had were shattered. The Iranian people were the most welcoming they encountered on their many travels. And the locals were very excited to see surfing practiced in Iran for the first time by a woman. Marion made a short film of this first adventure: Easkey surfs in Iran.The film made a big impact in international media.

People were welcoming, but they were surprised. They had never seen surfing before. “Because we were only women in the water, they thought it was a sport for women. So the men asked us if they could also do it.” – Marion Poizeau

Q: What was the reaction of the local villagers?

A: Well, we didn’t have the beach to ourselves for very long, that’s for sure. For the women who were with us, it was quite brave on their part. It’s one thing for me to go to rural Iran and surf as an outsider, but we didn’t know what it would be like for the women from Tehran to do it. There was no blueprint, nobody else had really done that at all. I mean, some male French surfers had come through briefly, many years ago, and there’s a paragraph on Iran in Stormriders, but that’s about it. This was really different.  – Surfer Magazine

A few years later, after working to connect with other pioneering Iranian sportswomen who heard about their story, Marion and Easkey decided to continue their adventure. They returned to Iran, this time with a project built around the objective:

To share a passion for surfing in Iran
and make it accessible to everyone, including women. 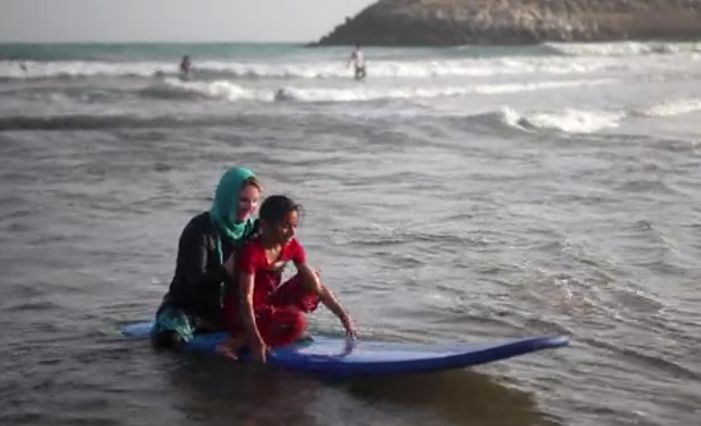 They were joined by Mona Seraji, Iranian snowboard ambassador, and swimmer Shahla Yasini. This second trip had a real impact in the region. All three women shared the belief in the power of surfing as a tool for connection, self-empowerment and bridging barriers.

Listen to their story on The World on PRI >

This experience became the subject of Marion Poizeau’s feature documentary, ‘Into the Sea’, the story of the first surfers in Iran, a story shaped by women. Together they planted the seed for new opportunities and made history, becoming the first women to surf in Iran.

“It’s  just been so incredible to see a
surf culture be born right before your eyes.”
–Irish surfer Easkey Britton, Surfer Magazine

Waves of Freedom actually came from this experience in Iran and in seeing the connection you can have with people through surfing. I guess I always knew about that, but just seeing the reaction that people have from the whole surf experience was amazing. Surfing there has opened up a space where people can share experiences with each other that wouldn’t happen otherwise. And it’s especially inspiring to see that surfing is a tool that women and girls can use for empowerment. I’ve seen the importance of having female role models in places like Iran and India, just because there are still so many barriers for women in these places.”

“What’s truly unique, is that the whole story of surfing in Iran will have been started by women. It’s quite incredible really to have a surf history in any nation be led by women.”

Thanks to Waves of Freedom for this inspiring story.

[symple_column size=”two-third” position=”first” fade_in=”false”]
It is the recognition of the power of surfing to transcend social, cultural and gender barriers that inspired Easkey and Marion to found the non-profit organization, Waves of Freedom.

Read an interview with filmmaker Marion Poizeau in Huck Magazine.