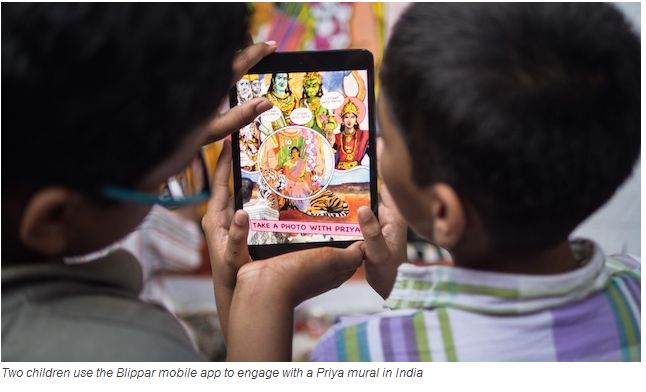 Beautiful murals of an Indian woman riding astride a fierce tiger have cropped up in India over the last six months, with speech bubbles broadcasting positive messages like “Fight violence” into the streets.

The depictions come from the UN-recognized comic book, Priya’s Shakti, a project by Indian filmmaker Ram Devineni, with poet Vikas K. Menon, and illustrator Dan Goldman, which details one woman’s epic journey from rape survivor to tiger-riding superhero after an encounter with Parvati, the Hindu goddess of fertility.

This spring, starting on May 7, Priya, Parvati, and the tiger come to New York, transforming the City Lore Gallery into a life-sized augmented reality comic book.

“Priya’s Shakti highlights the threat of sexual harassment and violence that women face on a daily basis unless deeply rooted patriarchal norms are challenged,” Devineni explains. “Priya is a new hero for a modern India.” 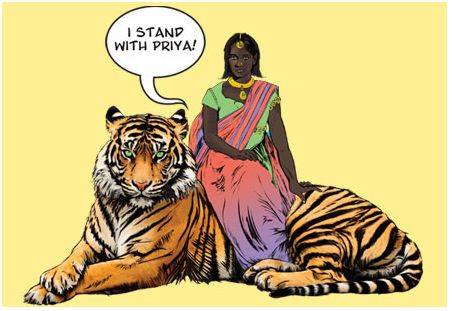 
Originally published in late 2014, Priya’s Shakti was created in response to rape and murder of a 23-year-old medical student two years prior, a tragedy which sparked nationwide protests and brought issues of violence against women to international media attention.

“Talking with several rape survivors, I realized how difficult it was for them to get justice,” says filmmaker Ram Devineni. “Often, they do not report crimes out of fear for their lives, or to avoid the backlash they may face from their family, authorities, and community. The burden of shame is placed on the victim and not the perpetrators.”

BONUS:  You can read the comic book online here >

4GGL thanks the Creators Project for this story.

The Creators Project is a global celebration of creativity, arts and technology. Launched in 2009 with Intel as founding partner, the platform features the works of visionary artists across multiple disciplines who are using technology to push the boundaries of creative expression.