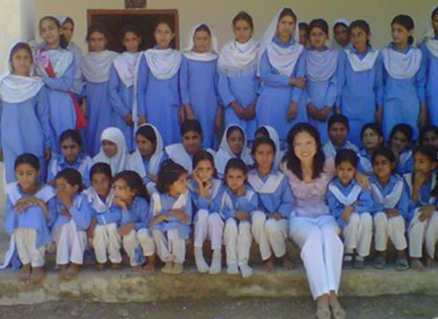 “Insanity is doing the same thing over and over again and expecting different results.” —Albert Einstein

Jin In, 4GGL founder and girls’ empowerment activist, recently published an article in Huffington Post’s Third Metric channel, which is dedicated to “redefining success beyond money and power.”  It was the perfect venue for a new way of thinking, which Jin In champions worldwide in her work for girls and with women’s empowerment.

Jin told us that one of her favorite quote is (like the one above) accredited to Albert Einstein who said, “We cannot solve our problems with the same level of mindset that created them.” And then she asked us, in regard to the world’s biggest problems facing us today:  Are we going to keep reacting to fear or boldly lead with love?

To date, the United States has spent more than $25 billion training and equipping the Iraq army. Now, after a war that has cost us trillions of dollars and too many lives, President Obama has asked Congress for half a billion dollars to train and equip yet another army—Syrian opposition fighters, as an alternative to ISIS, the Islamic State of Iraq and Syria.

“How about we use the funds to develop an army of empowered femininity — the next generation of women leaders in the exact same places where these terrorists reign?”  —Jin In, 4GGL Founder

According to Jin, the largest population in history, 1.8 billion young people are on the planet today. Ninety percent of this enormous human force is in the developing world, and they are the fastest-growing population segment. In fact, young people make up the largest proportion of the population in the Middle East and North Africa. So the time is NOW to change the course and take action.

“The power of youth can be continually harnessed by terrorists with anti-American and anti-Western agendas, or it can be nurtured to build vibrant civil societies,” says Jin.

“This money will go a long way in the development of tomorrow’s women leaders—much further than training war-makers. We will be equipping a generation to create powerful and lasting change where these terrorists breed and reign with a ripple effect in the region and a positive impact in our own national security.”   Read more >

Like this sort of innovative thinking?
You can read the entire article here:

R U ready to join the 4GGL Movement?

We hope you’ll take this incredible opportunity
to make an impact on girls and join the movement!

PARTNERS:
For individuals or universities interested in partnering with 4GGL: info@4GGL.org

BONUS:  Now you can tune in and hear an interview with Jin in Amy Schuber’s Inspired Conversations. AND… Learn more about Jin’s mission and background when you read Jin’s interview with Perspectives on Global Issues, the academic journal of New York University’s Center for Global Affairs.

It’s for young women worldwide and is available in Arabic, Chinese, English, French, and Spanish.

Take our Survey and help us collect data to further the 4ggl mission!