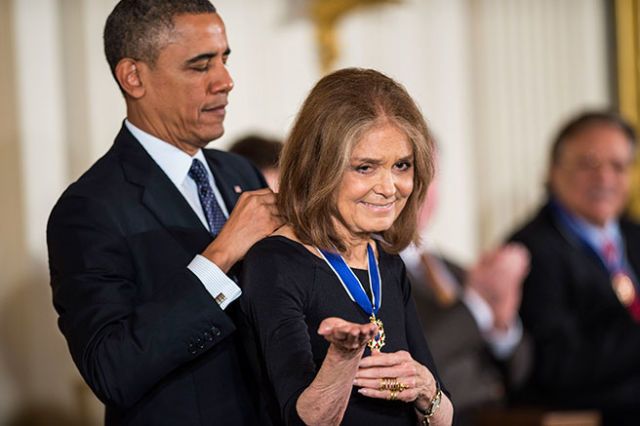 “A FEMINIST IS ANYONE WHO RECOGNIZES THE EQUALITY AND FULL HUMANITY OF WOMEN AND MEN.”‬ – Gloria Steinem 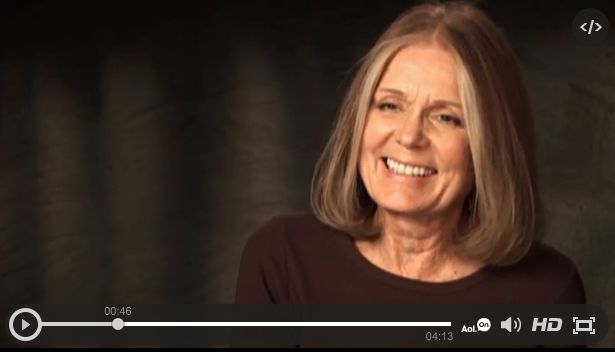 In the MAKERS video above, you’ll learn first-hand from Gloria Steinem how and why there was a “need for a movement” and to become a feminist and an activist in the 1970s, and for life. Hear her talk about her evolution from journalist to activist, launching Ms. Magazine, and proof of the women’s movement’s success.

“You know in my heart, I think the only alternative
to being a feminist is being a masochist.” – Gloria Steinem

Gloria Steinem is a renowned writer and activist for women’s equality. She was a leader in the women’s liberation movement, co-founded Ms. magazine, and helped launch a wide variety of groups and publications dedicated to advancing civil rights. Ms. Steinem has received dozens of awards over the course of her career, and remains an active voice for women’s rights.  Watch her White House video about “waging peace.” >

From the NY Times:

“A journalist from Ohio who once went undercover at Hugh Hefner’s Playboy Club for a story, Gloria Steinem emerged in the ’70s as the aviator-shaded face — and de facto voice — of the women’s movement. Her magazine, Ms., which she co-founded in 1971, was notable for being owned and operated entirely by women, and was one of the first mainstream publications to directly address the issues of reproductive rights and domestic violence.”

Today at 81, she is an icon for a new wave of celebrity feminists that includes Lena Dunham and Emma Watson. 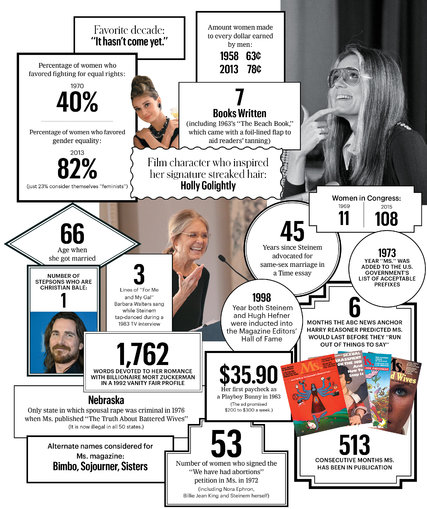 BONUS: Omega’s Women Leadership Center has a great bio on Gloria if you’d like to know more about this influential woman! 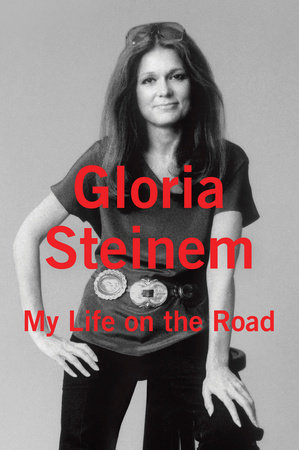 Gloria Steinem—writer, activist, organizer, and inspiring leader—now tells a story she has never told before, a candid account of her life as a traveler, a listener, and a catalyst for change in her new memoir “My Life on the Road.” [/symple_column]

[symple_spacing size=”50″]4GGL thanks The New York Times Style Magazine for this awesome infographic!

And thanks to Elle magazine for these amazing quotes and our cover photo showing Ms. Steinem being awarded the Presidential Medal of Freedom in 2013.  For more information about that, please see the video and article on the White House Website!